6 Campaign Poster Ideas That are Captivating and Effective 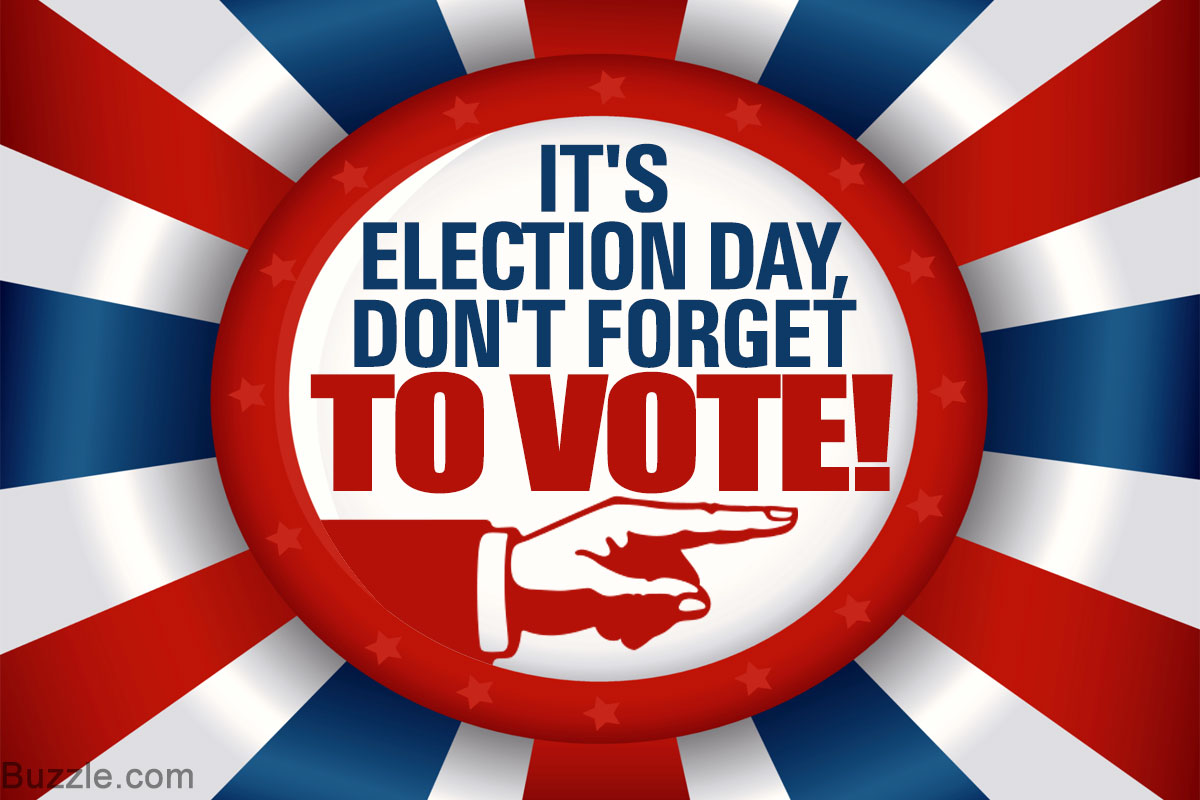 Running an election campaign is no child’s play as you will discover when you plan your first one. Wooing voters and running a successful campaign takes a lot of planning and hard work to back it up. One of the important parts of any election campaign are the posters that reach out most of the people.

Elections are standard practices in any democracy and are the prime features that distinguish it from any other political system. The people have a choice in deciding whom they want be led by. One thing that you must understand while campaigning for elections is that – ‘Voter is the king!’. If you want to win an election, you need to think in terms of what the voter wants. If you are able to convince him or her that you are the person they can trust and count on, their votes are yours! For that to happen, you need to reach out to the voters and convey your thoughts and stands about various issues. Campaigning is making this dialog happen. Among the many ways you can reach out to the people, one of the most effective ones is through campaign posters.

Campaign posters need not be only devoted to elections. There are many fundraising campaigns that need to rope in people who can donate for a worthy cause. Whatever be your purpose, the tips that I share here might be of some help, be it an election or fundraising campaign. The objective is to convince people and rope them in.

One of the most important things to consider while designing posters is taking your target voters into consideration and the issues that you want to stand for, that affect those voters directly. It will help you decide what message you want to convey.

Being brief and precise in what you want to say through your campaign posters is very important. A short message put in crisp and witty fashion drives the point home better than a lengthy one. Design a variety of posters that identify your stand on every issue which you plan to raise. Selecting a creative campaigning team which can project your image through posters is important. Create catchy slogans that can be easily remembered. May your identity be a part of the posters, as people need to know the person behind the campaign. To make an impact, use the national colors in your poster designs. Photoshop is a great software to create your posters. Study presidential election campaigns for more tips.

The primary function of any campaign poster is to project the personality of the candidate to the voters and convey his view about things that matter. Taking these two factors into consideration, here are some ideas for student council elections which are small political arenas, where future leaders test their mettle.

Connect A Positive Quality With Each Letter Of Candidate’s Name 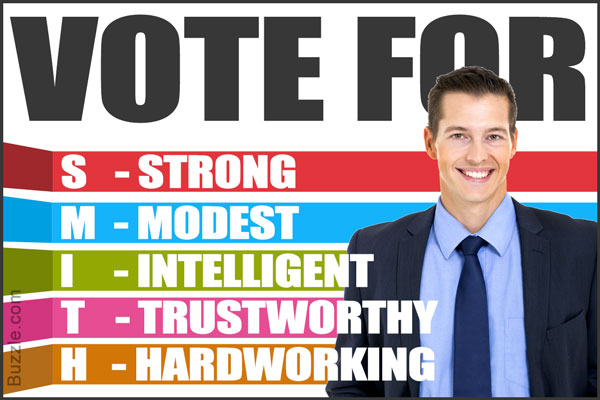 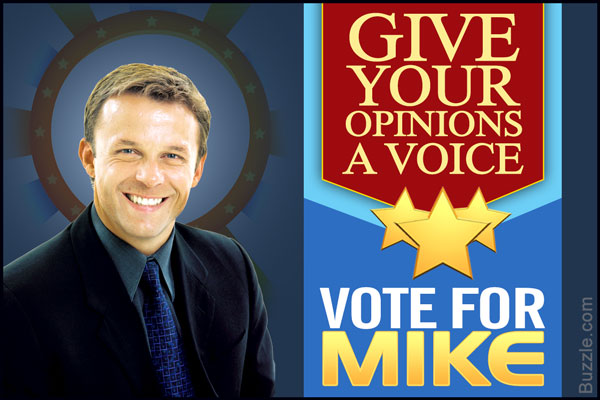 Catchy slogans can make for great posters. Use your imagination and create a slogan that is witty, that includes the name of the candidate in it along with a good message.

Face and a Message 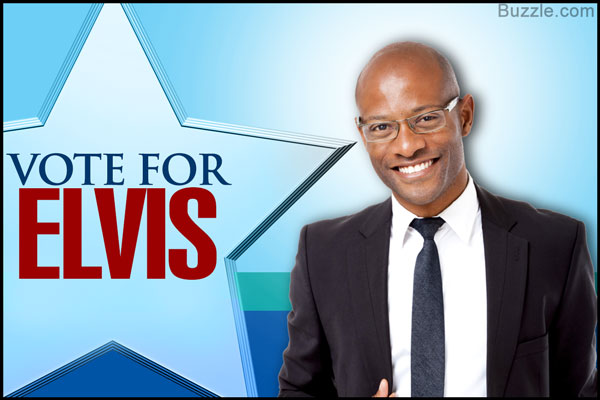 The primary function of a campaign poster is to make the identity of a candidate known to your fellow students. The face of the candidate printed across the poster, along with a simple ‘Vote For. . ‘ followed by the candidate’s name is the simplest poster that you must have, as people need to know the person who they are voting for by face and name firstly.

Another prime idea for campaign posters is writing messages that voice the stand of the candidate on issues that students are concerned about. Questions that raise certain issues can be asked through posters followed by the candidates name. You can basically quote the candidate on the posters. These quotes need to be strong and sharp. 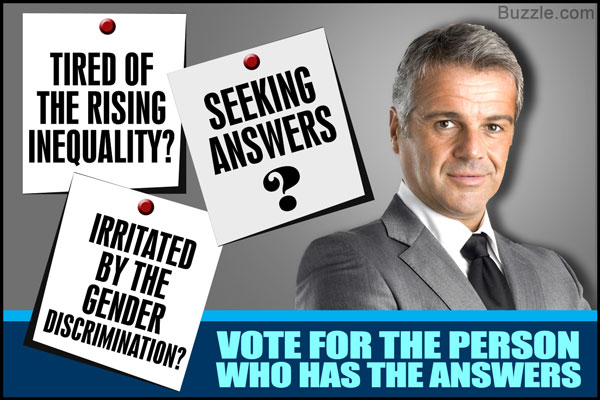 One of the most interesting ideas that I came across, was a series of posters placed in succession asking short and pointed questions about important issues. At the end you can place a poster with the photo of the candidate and a tag line saying ‘Vote for the person who has the answers!’. The idea is to strike conversation directly with the fellow student who might vote for you.

Let Your Past Work Speak 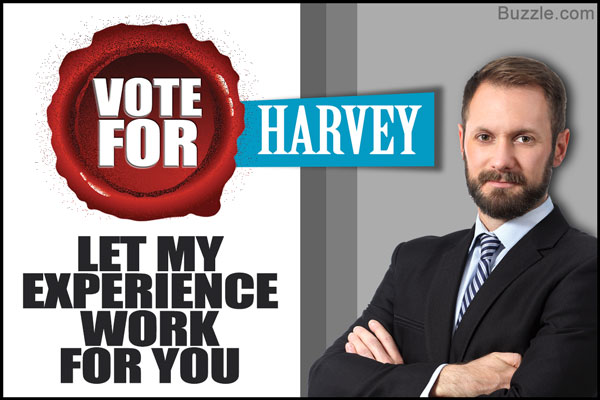 If you are an incumbent running for the same post again, you can make posters depicting the work and objectives accomplished by you, in your tenure. You could just let a photograph speak for the work done, with a small caption like ‘Vote For One Who Delivers’ followed by the candidate name. Alternatively, you could have a checklist of all the promises made, where you delivered and just say ‘Delivered…’, followed by ‘Vote For..’.

You could also have some funny posters that mock your competition in a satirical fashion. However, don’t make this your prime line of attack. A true and sincere message, conveyed through a poster, can rope in a voter, if it strikes a cord with his own thinking. Hope, the ideas and tips shared here have put you on the right thinking track.